Jena Windsor is a referee that never expected to be a referee.

CARHA Hockey spoke to Jena to capture her story, as well as the growth she's seeing with women in hockey, and her advice for young girls in hockey!

"My name is Jena Windsor and I am a proud referee.

Growing up, I always wanted to play hockey but unfortunately amongst other things it was not that affordable. I had skated on public skate nights, and played some ball hockey in the neighbourhood. Never then did I think I would one day be a referee of a sport I did not play.

In 1999 I moved to Kelowna and met some new people. They refereed hockey. I watched a few games from a different perspective, not as a player but as a referee and thought to myself, I can do that! I want to do that!

So that next year I went to a clinic and carded. I was twenty at the time and I looked ridiculous on the ice. I found that skating was not like riding a bike. Here I was at twenty, refereeing five year olds, who could skate better than me. By the following year my skating had improved and I was starting to referee higher levels like bantam and midget.

I have great referring memories. I had the opportunity and privilege to referee some great hockey, including:

Little did I know how rewarding the refereeing experience would be, and where the road would take me. Sure, it was tough starting out. There was a learning curve, but looking back I was proud to have faced the challenge. I joined a tight-knit family, made some extra money, and had fun along the way. I call it a brotherhood and in my eighteen years of officiating I have always felt welcomed by all fellow officials, male or female.

I will never forget the wonderful people I met along the way and the lifelong friendships I have made. My fellow officials Bill Wylie and Blair Dietz died On January 13, 2002. We lost two hockey referees in a car accident while they were traveling home to Kelowna from a Junior Hockey game played in Revelstoke B.C. A memorial referee jersey still hangs in the West Kelowna arena. This was a tragic time that shook our refereeing and hockey community. I will never forget how those communities rallied and supported. We were all there for each other.

More recently I have had the opportunity to share the love of the game with my husband. He is now a level three official and is officiating above Minor Hockey. I often remind him who taught him everything!

Over eighteen years I have had the opportunity to work with many great female officials across the lower mainland of British Columbia and across Canada. It always makes me excited when I see young female officials starting out. I love to share my experiences with them and mentor where I can. There are so many opportunities out there for female officials. I am happy to say that I have seen more female representation over the years in refereeing hockey.

Advice I would have for all young officials is, appearance matters. The most important quality of a good official is presence, which means, "carrying yourself well, looking fit, athletic, and moving well." Study your rules. Communication and trust is crucial. The number one thing for all officials at any level is to have fun out there!

We are all part of a game we love!

Thank you for this time to tell my story." 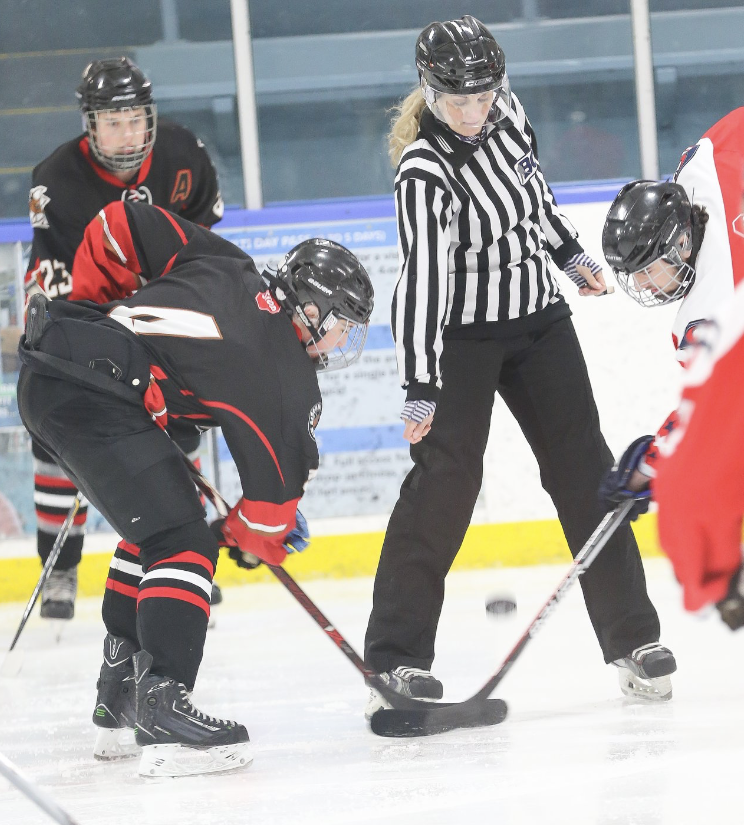