Approximately 12 years later, in 1979, the NHL expanded as the Winnipeg Jets, Quebec Nordiques, Hartford Whalers and Edmonton Oilers, all from the WHA (World Hockey Association), would merge.

Much talked about rivalries would emerge years later, including the Battle of Quebec rivalry between the Canadiens and Nordiques. During this 80’s rivalry, these teams battled in five gruelling playoff series, which saw the Habs come out on top three times.

The evening that every fan of this rivalry seems to remember is April 20, 1984, when both teams played Game 6 of their best of seven series at the Montreal Forum in a game which would later be referred to as the ‘Good Friday Massacre.’ 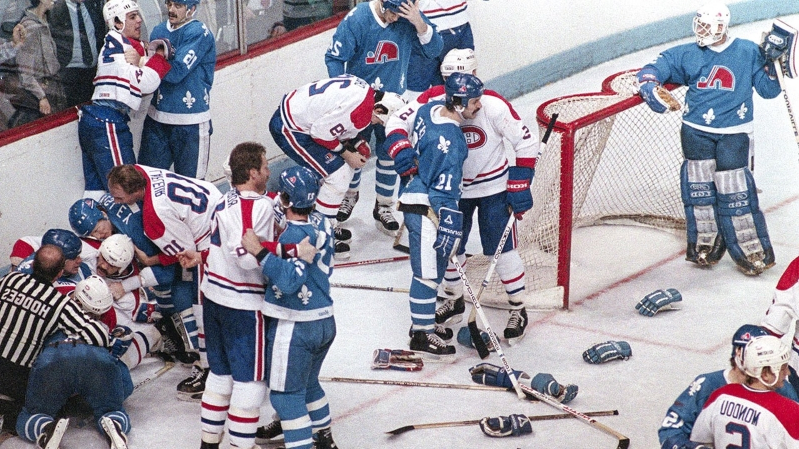 Prior to what was a major brawl, Montreal found themselves trailing 1-0, but by night’s end, closed out the series with a 5-3 win.

In what has been described as the most infamous episode of the Battle of Quebec, Game 6 was not for the faint of heart. There were numerous fights, which at the end of the second included a bench-clearing brawl. This second period bench brawl saw the gruesome and scary incident of Canadiens Jean Hamel lying unconscious after being sucker punched in the eye area by Nordiques Louis Sleigher.

Following the second period brawl, both teams took the ice for the third. Not long after, another series of brawls erupted, including Nordiques forward Dale Hunter fighting with his brother and Canadiens forward Mark Hunter.

As mentioned earlier, a WHL team that also came to the NHL in 1979 were the Oilers, who in the mid-1980s had what was affectionately known as “The Battle of Alberta” rivalry with their Alberta counterparts, the Calgary Flames. During this period, both teams were powerhouse squads who played in the Campbell Conference. During an eight-year span from 1983 to 1990, either the Oilers or Flames drank from Lord Stanley on six different occasions.

The Oilers, who at that time were at the height of their dynasty, had gruelling, highly intense playoff series wins against Calgary in 1983, 1984, 1988 and 1991. Perhaps their most memorable series was the 1991 Smythe Division when in their last playoff match-up they went the distance, as Edmonton ended up winning in seven games. Calgary fans would, without hesitation, point to the rivalry’s highlight occurring on April 30, 1986, when Oilers defenceman Steve Smith, with approximately 15 minutes left in regulation, accidentally scored what turned out to be the Smythe Division Finals Game 7 series-winning goal into his own net. The years following this mistake, whenever Edmonton came to town, and Smith had the puck, fans would mockingly shout, shoot. Ironically enough, Smith would finish his career in Calgary, where he played from 1998-99 until 2000-2001.

Hockey fans have had the privilege of being entertained by so many other rivalries, including in the early 2000s in what was called ‘The Battle of Ontario,’ which involved the Toronto Maple Leafs against the Ottawa Senators. Earlier, there was also the ‘Battle of the Hudson River,’ which pitted the New Jersey Devils against the New York Rangers. Fans in the New York area also had the ‘Battle of New York’ rivalry which was the New York Islanders against the Rangers.

Meanwhile, in the mid-1990s, a fierce rivalry was born between two powerhouse squads who were on their way to greatness in the Red Wings and Colorado Avalanche; the Avs in 1995 moved to Denver from Quebec where they played as the Nordiques.

The historic roots of this rivalry can be traced back to their 1996 Western Conference series. During Game 6 action, an ugly incident occurred which would cause lots of hate between the teams when Avalanche forward Claude Lemieux drilled Red Wings forward Kris Draper from behind and into the boards by the bench. The hit left Draper with a broken jaw, shattered cheek and orbital bone, along with a concussion. Meanwhile, the Avs went on to win the series and the franchise first of their Stanley Cups.

After the series, Red Wings forward and future Hockey Hall of Famer Dino Ciccarelli added fuel to the rivalry by saying,

"I can't believe I shook this guy's friggin' hand after the game; that pisses me right off." Ciccarelli was of course talking about the traditional handshake after the playoff series is over.

The intense hate between these two teams spilled over on March 26, 1997, at Joe Louis Arena. In a game which would see nine fights, the event which stands out during a late first period melee was Draper’s friend and linemate Darren McCarty getting revenge by beating up on Lemieux. This happened with separate fights going on, which eventually led to a goalie fight between Avalanche Patrick Roy and Red Wings Mike Vernon. In reflecting, Vernon believes that these fights brought the Wings closer and helped them win the Stanley Cup that spring.

A lasting highlight to this rivalry was Avs forward Mike Keane publicly criticizing Draper for having McCarty get involved with Lemieux. Also, later on that spring during the Western Conference Finals, Avs coach Marc Crawford was seen standing by the glass swearing at Red Wings coach Scotty Bowman.

This rivalry also had another goaltender brawl which took place on April 1, 1998, when once again at Joe Louis Arena, Avs goalie Patrick Roy went toe to toe with Red Wings goalie Chris Osgood. The two teams that nights combined for 46 penalties totalling 228 minutes, and once again, the Wings would win the Stanley Cup that spring. 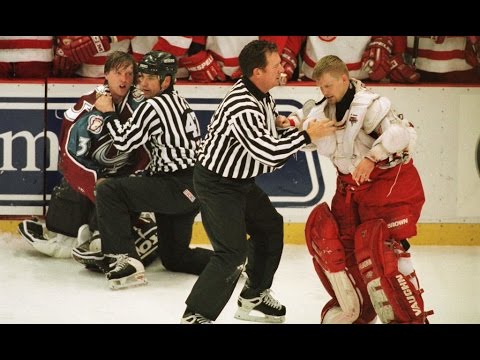 Another significant date to this rivalry is March 23, 2002, where this time in Colorado at the Pepsi Center, the Wings and Avalanche had another brawl, only this time the goalies didn’t go toe to toe. The Wings goalie, Dominik Hasek, did skate from one end of the rink to the other in order to confront Roy during the fights but tripped on a stick, and officials separated the two before they could go at it.

Hockey is full of fascinating stories and a rich tradition that captivates the average hockey fans. When talking about the greatest NHL rivalries, there are so many to choose from, and no wrong answer to which one is the best.