Keep the Game We Love Going ODR Contest  - Congratulations to our Winners!

CARHA Hockey, alongside our partner iPlayHockey, launched the 'Keep the Game We Love Going ODR Contest' to celebrate the tradition of the ODR as well as the individuals that keep them going in our communities. Congratulations to our three Grand Prize winners of a $1,000 assist towards their community ODR operating costs for the 2022-23 season. We look forward to bringing the campaign back in 2023. Click here to learn more.

At CARHA Hockey we believe in the power of sport and community recreation programs. The Next Stride is our new community outreach initiative. Stay tuned as our new programming is launching shortly! 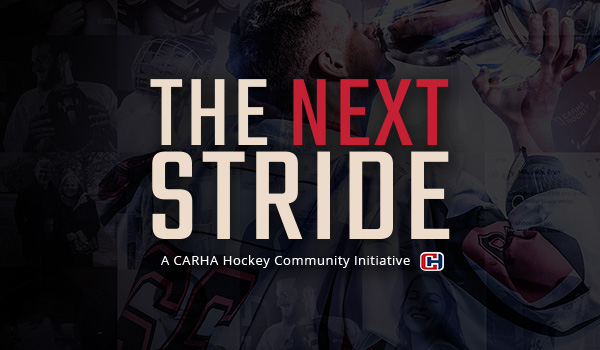 The Next Stride's first campaign, #HockeyVacciNation, was created as a platform for positivity and celebration of individual and community contributions as we overcame the challenges of COVID-19 together as one team. It was meant to recognize, unite, and engage our fellow Canadians as we got one stride closer to playing the sports or activities we love.

The campaign began in June 2021 and our nine (9) finalists competed through an online vote for a $10,000 grand prize to be donated on their behalf to a cause of their choice. Congratulations to Harold and Karen Bailey of Madoc, Ontario. They were nominated for their work with the Bruce Lee House League Hockey and the donation will go towards youth initiatives in their community.

The CARHA Hockey Safety Series was launched as part of the continued efforts to promote a safer sport environment.

We are pleased to be one of 25 organizations to receive support from Canada's Sport Information Resource Centre (SIRC) to focus on education and awareness of concussions and safe sport in our communities.

For details and further resources, visit our Safety Series page.

Research shows that when mom participates in sport and physical activity, the whole family wins!

Celebrate #MomsGotGame and share a story with CARHA Hockey about a mom who inspires others through active living. This could your own story (if you're a mom), your mom, partner, or another mom or mother figure's story (family or friend). How do they stay active? Trying a sport for the first time or part of an organized league; coaching or training; encouraging walks, hikes, or bike rides with family?

Check out these stories from our members:

To submit a story to be featured on our news page or on social media, email us.

Join us at the Minto Recreation Centre - Barrhaven on Thursday, April 28th for a free session to brush up on your skills or let us assist you in learning more about the game! Bring your friends for social evening on the ice. We are thrilled to once again receive funding from SIR to support their Mom's Got Game initiative and this year offer an in-person program.

Contact Kristan to work with us to bring a Learn to Play Program to your community.

The Town of Minnedosa Parks and Recreation Services was selected to participate in the Canadian Women & Sport Same Game Challenge to advance gender equity! As part of the commitment to gender equality in sport, CARHA Hockey is proud to partner on a Ladies Learn to Play Hockey Program for Minnedosa, Manitoba.

Contact Kristan to work with us to bring a Learn to Play Program to your community!

CARHA Hockey is working with the Hamlet of Pond Inlet, Nunavut, to support the establishment of a women’s recreational hockey program in their remote community. Our team continues to look for applicable grants to help provide the funding to equip the team of young women with hockey equipment. An exchange program will be established for items to be re-used by returning players or passed on to new players. We are providing jerseys and socks for the women's team.

Check out our interview with Theresa Dalueg, Community Economic Development Officer for Pond Inlet, for an update on the team's progress! 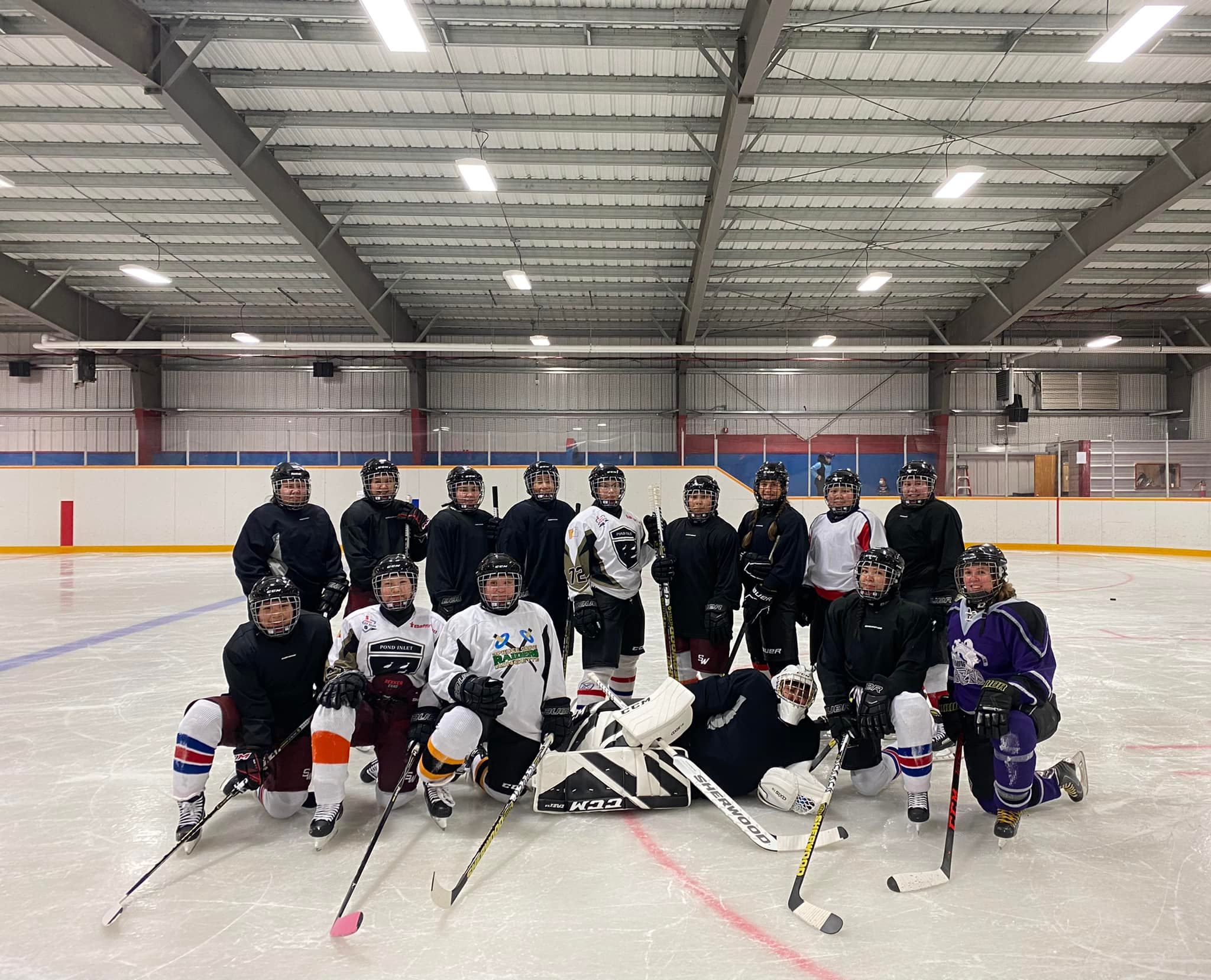 We regret to share that due to the ongoing challenges of the pandemic and in accordance with local health and safety regulations, this event has been postponed. CARHA Hockey looks forward to remaining a part of this great initiative and furthering the conversation to support climate action. Read more here.

Let’s stick it to climate change!

Stonewall, Manitoba, was selected to host a Save Pond Hockey event in February 2022. The event is part of the Climate and Sport Initiative, which uses sport as a platform to educate, engage and empower Canadians to protect our planet for future generations. Stonewall would transform Kinsmen Lake at Quarry Park into an outdoor hockey rink for the first time ever. The community would be joined by pro athletes, sports enthusiasts, and sustainability experts in the fight to save our favourite outdoor sports and have fun while doing it.

The Climate and Sport Initiative shines a spotlight on the direct effect of climate change on the sports we love - and on our nation - and empowers us all to get in the game of preserving both. The multi-year initiative will include a series of live and virtual public events and experiences, training and support to help athletes become climate ambassadors, and youth mentorship and engagement. It is led by GLOBE Series, The Delphi Group, and Leading Change Canada, funded in part by the Government of Canada, in partnership with the Clean Foundation, and championed by Hayley Wickenheiser.

Introduced in 2016, CARHA Hockey's Achievement Award was established to honour and recognize those volunteers in the adult recreational hockey community.

CARHA Hockey acknowledges that much of the work that is managed behind the scenes of this great sport is handled by individuals who have committed and donated their time to the hockey community. As a token of our appreciation, each September during CARHA Hockey's Annual General Meeting, a review of nominees will be conducted and the association will select and name Achievement Award winners (maximum of three per year will be awarded).

We would like to know the individual's outstanding contributions to CARHA Hockey and/or the sport of adult recreational hockey in Canada, the impact that he/she has made in the community through volunteerism, and the extent of their volunteerism determined by time, years, days, hours, etc.

The Achievement Award recognizes a CARHA Hockey member, friend, support and/or devotee who has made an outstanding volunteer contribution by way of:

a) Promotion of CARHA Hockey;

b) Commitment to member teams, leagues, tournaments and officials:

Letters of Support from others relating how the individual has demonstrated their contributions to the aforementioned from a volunteer standpoint.

Since 1975, individuals and/or hockey-related groups who exemplify the organization's specific goals and objectives have been inducted into the prestigious CARHA Hockey Hall of Fame. These individuals are easy to identify as they have made a personal commitment to adult recreational hockey as a builder, a player, a friend, a member of the media, or perhaps as an entire team.

If you know someone who is deserving of this honour, please forward your nomination to CARHA Hockey. The Board of Management selects the final recipients, ensuring that the selection process is fair. Click here for more information about the Hall of Fame nominations, as well as descriptions for the six categories - Player, Team, Builder, Media, John Sergnese (Friends of CARHA Hockey), and International Friends.

Those who have already been selected into the Hall of Fame have set a high standard of commitment, dedication, and sportsmanship that the association continuously endeavours to maintain.

Put your Canadian city on the international map!

The CARHA Hockey World Cup is organized every four years in a select Canadian city, and attracts participants from all across Canada, the United States, Asia and Europe. Every four years, over 140 teams from 15+ countries travel to the Host City for this week-long event. It’s built on an Olympic-themed approach in that it’s hosted every four years, and since the event’s inception, it has grown to be the largest international adult recreational hockey tournament in the world.

The economic benefit to the Host City is estimated between $12 and $19.2 million. CARHA Hockey recognizes the importance of leveraging relationships with Host City partners such as arenas, hotels, conventions centres, tours/attractions, and bus transportation.

Click here to learn more about the CARHA Hockey World Cup or contact Lucy Peeling, Manager, Special Events and Programs for inquiries about hosting opportunities. The bid guidelines are made available approximately three and a half years prior to the next event.